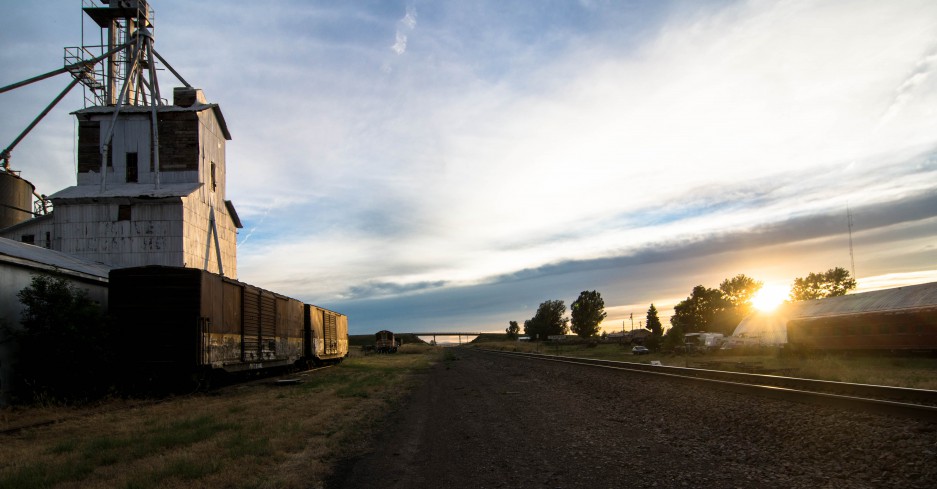 I was working late and judging by how silent my phone was, I had a feeling all my friends were all finishing their evening rides as I was just thinking about starting mine. I head out to the garage and drag my heels getting ready. I aired up the tires, shined the frame a little and even gave the headset a little tightening. All while quietly hoping somebody calls to go out drinking or anything else other than get out of breath and sweaty. But it’s early in the week and nobody is calling. Everyone is already all tucked in and warm inside. Fuck them. Let’s go. I throw a beer and an extra light in my pack and start pedaling towards the mountain. I missed sunset by a few minutes but the remaining light is shadowy blue and the air is ice cold. My legs feel like hot garbage, but I tell myself that I have to work through it and this will be worth it. It usually takes me about fifteen minutes to get the legs feeing normal anyway. I have to push out all the stagnant blood in my legs after sitting in front of a silly computer all day. I put my head down and grind up the steep gravel road.

I rarely ride with headphones on, but for some reason I grabbed them this night. Sturgil Simpson is singing in my ears:

“Most outlaw thing that I ever done was give a good woman a ring. That’s the way it goes. Life ain’t fair and the world is mean”.

I smile because I can relate all too well. I’ve done some crazy shit in my life but giving that woman a ring might have been the most punk rock risk that I’ve ever taken. It didn’t work out, but that’s a story for another time. I’m not mad or even sad. But that lyric always gives me a little pause and a chuckle.

I crest that last rise that tells me the singletrack is close. Bang a left onto the trail and keep climbing. Going uphill is always better on a trail so I give it a little more gas. I stomp hard as my quads burn and the cold air hit the bottom of my lungs. Through the breaks in the trees I can see the snow-covered mountain tops still glowing in the blue and purple dusk. It’s not quite winter, but it snowed up here last night. Yesterday’s snow is now today’s mud and a sizeable herd of cattle were driven through here within the past couple days. They left the trail a fine mix of peaty mud and copious amounts of bovine shit. Contrary to popular belief, cows aren’t all that dumb, they know enough to use the damn trails. They follow the switchbacks while post holing their fat hamburger asses in the mud instead of trying to navigate the scrub oak and underbrush. Mammals love the path of least resistance. I try to power up a steep little pitch and my mud and shit caked tires spin out. I curse the universe as I crack my cold exposed knee on the stem. Goddamnit.

Once I get up past 9,000ft the grade eases and the mud is frozen. All the cow bomb holes are now a steady conveyor belt of rock solid bumps. I try to go faster, thinking that a little speed might smooth things out. I find that it’s a good theory for bikes and also a lot things in life.

I punch out of the woods and into the clearing that signals the top of the climb. Damn, that felt good. I hear a rustle in the trees and shine my light over. It’s a bull with his head resting on the back of a cow, his red rocket hanging out and pointing right at me. I guess I interrupted some romance. Sorry, bud. Carry on. I pass by without incident and find a good sitting log to have myself a beer. It’s pitch black now with no sight of the moon. I turn off my light and crack open a beer. I can feel the cold coming through the soles of my shoes. I don’t mind it. I take a deep breath and the night assaults my senses. I hear the wind through the sage. The smell of the mud and shit mixed with the freezing air stings my nostrils and the back of my throat. I have been in this moment before. But when? I zone out sipping my beer, staring into the darkness where I know the mountains are. Then it hits me.

A few years ago I was in Nepal with that woman I gave the ring to. We were pushing our bikes for one last day, to the high point of our trip. It had snowed and everything was a slushy mess. We had been making jokes for weeks on this trip about all the livestock shit we’ve been riding through. We don’t even have to smell our own filth because our clothes and gear always had a little barnyard aroma to them.

Did you hear that? We stop crunching our footsteps on the frozen trail and listen. My ears focus on a beautiful sound between my inhales of thin air. There is singing coming from the valley just below us. We drop our bikes and walk to the edge of the path and look down. There, in the middle of a tiny farm field, surrounded by Glorious Himalayan peaks, a man is driving an ox drawn plow through a field. What I can only assume are his wife and daughter about twenty feet behind him collecting potatoes in burlap sacks as the plow blade turns them out of the ground. The man is singing a low rhythmic tune, almost a chant, as he goes straight down the row. Then, when the beast of burden gets to the end of a row the potato mantra changes to a loud yell that almost sounds like a yodel that echoes through the valley. It’s with this change of tune that the animal does and about face and starts down a new row. Now on the straightaway, the original song resumes. We stood there for a while, side by side in the high Himalayas, taking it all in. Lap after lap, song after song. In that moment we were so incredibly present. Emotions washed over us, and a few tears froze on our cheeks. Everything about that moment was beautiful.

Well shit. That’s a heavy memory to be having on a Tuesday night. I tumble it around in my mind some more, finish my beer and drop into the downhill smiling. It’s fast and frozen but quickly degrades to a muddy mess as I lose altitude. My eyes are watering and my brake fingers are a little frozen as I gain more and more speed. But again, I don’t mind this cold. It will be over soon.

It’s amazing how something as simple as the smell of shit on a cold night can bring back such wonderful memories. Life might not be fair and the world might be mean. But we can still turn shit into smiles.